Fish finders are also called Depth or Echo sounders. To know how a fish finder works, one needs to know the basic operating principle of it. Fish finders are electronic devices that transmit ultrasonic waves from a transducer to locate and show underwater objects on a display. The target is often fish or a school of fish or some hidden objects like treasures from sunken ships. The display screens have evolved from being paper, on which the image was printed, to CRT screen and now to LCD screens.

are also called Depth or Echo sounders. To know how a fish finder works, one needs to know the basic operating principle of it. Fish finders are electronic devices that transmit ultrasonic waves from a transducer to locate and show underwater objects on a display. The target is often fish or a school of fish or some hidden objects like treasures from sunken ships. The display screens have evolved from being paper, on which the image was printed, to CRT screen and now to LCD screens.

A fish finder uses ultrasonic waves to locate its target. The ultrasonic waves propagate through the water at a constant speed of 1500 meters per second. When the waves strike an object such as a fish or the sea bed, the waver are then back towards the source. The depth can then be calculated by measuring the time it takes to transmit and to receive the reflected waves. This is the basic principle of how a fish finder works. A lot of consumers tend to utilize their fish finders to locate hazards or threats, even while not fishing.

A fish finder sends out high frequency sound pulses that go ahead and come back while they are refrained from going too far. The length is measured from the time duration to find out the depth of the object and the size of it. This ‘how fish finders work’ article will talk about the working principle in detail in the following paragraphs. 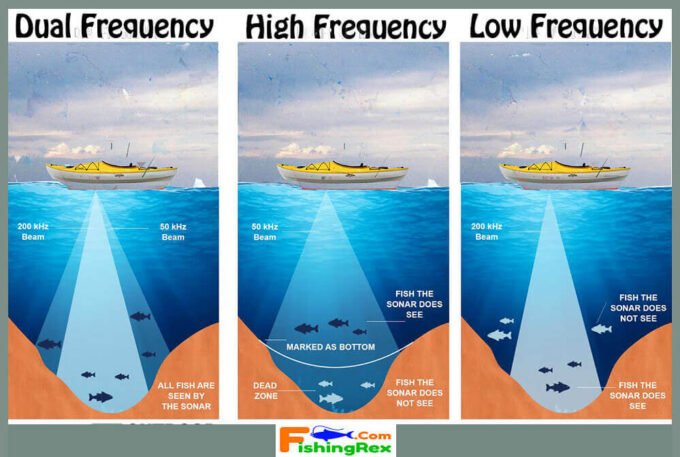 First off, the transducer of the fish finder transmits a stream of ultrasonic sound waves through the water. The waves bounce off objects in the water, such as fish, trees and other inanimate objects. Next, the device measures how much time it takes for the ultrasonic waves to come back to the source. Then the device uses that information to create a diagram of the underwater objects and displays it on the screen.

Sound waves reflect best off objects which have densities that are different from water. So objects which are denser than water all clearly show up on the display. There are also side-scanning and forward-scanning sonars available in the market which are more expensive than general purpose units. These are normally used for large fishing hauls and for tactical or research purposes. No matter how you utilize your fish finder, whether to navigate the depths, analyze the composition of the rock bed or to locate optimal fishing spots, you will need to understand some basic concepts beforehand. You need to know beforehand which transducer frequency is the best for each condition, what resolution is required, what the power requirement is and how to distinguish fish from the objects shown on the display. Knowing these is essential to intelligently operate a fish finder.

Transducers that emit sound waves with frequencies ranging from 28 kHz to 455 kHz are the most common. Some of these transducers show the speed of the boat and the water temperature. Lower frequencies can penetrate water easily, while higher frequencies can produce diagrams with finer details. Some units can emit waves of different frequencies, making them suitable for using on both shallow and deep water, which makes the fish finder more versatile. Displacement sailboats require a shoot-through or a through – hull transducer mounting. The through – hull mounted transducer can operate more accurately. The shoot – through variant is generally more exposed to the inside of the hull and as such doesn’t require a large hole. Both types require careful alignment and locating. If you decide on the through-hull mounting you will have to install it in a hull covered below the waterline. The core needs to be sealed properly.

There is a large variety of transducers, ranging from a pre-packaged unit for a specific machine to many other options with customization options available. They are usually made from plastic, wood or bronze. 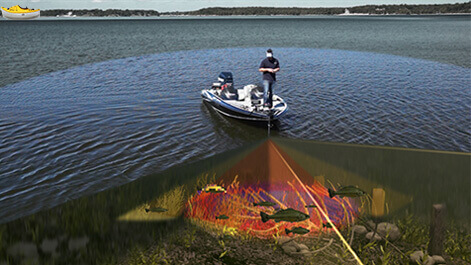 To know about how fish finders work, it is essential to know about the functions of these fish finders. There are 4 major functions which increase a fish finder’s usefulness. Those are – zoom, A – scope, bottom lock and white line. The bottom lock and zoom functions of the display screen increase the screen’s resolution, making the details and information look better and the pictures clearer and crispier. But it shows only a portion of the water column, not the entire location.

White line changes the way a device displays the bottom echoes. When the white line is activated, the bottom will show up as a thin black line under which there will be gray or white lines, showing weak or strong echoes. This makes the whole process easier as determining the bottom surface’s hardness or softness is possible from this vertical line. It can also help differentiate in objects lying in the bottom or closer to the sea bed. This can give you an overall better idea about your anchoring decision and technique.

The maximum power output of the top of the line fish finders lies between 100 and 1000 watts of RMS (Root Mean Square) power. This can be taken to mean an average continuous power output. More power generally means that the device will work better in the deeper water.

There are some more operational tips which can help you in learning how fish finders work. The ‘Auto’ mode is a good starting point for any beginners. You will be able to interpret the symbols and information on the display screen better once you get to know how to adjust and customize the manual menu options by yourself. There are different ways by which you can learn them, but the easiest way to start is to increase the gain while you begin to see the ‘Noise’ level in the water column. You can later back off the gain to adjust again.

To know how fish finders work, the best way is to take it out in the water and see how the default mode works. Once you get used to the symbols and get a general idea about what those individual things mean, you will get to know the customization options and then adjust them according to your needs. I hope this how fish finders work article will be helpful for you.