Muskies or Muskellunges are the biggest freshwater-dwelling predators that are mainly found in the North American waters such as, Canada. Fishing itself is an enjoyable sport and the particular Muskie hunting can be a bit challenging but at the same time extremely rewarding. The triumphant feeling that overwhelms you when you hold that giant beauty in your hands is quite irreplaceable.

Since these fishes are notorious for their aggressive and energetic nature, it might be a bit difficult to fish them. This page may act as a guideline explaining to you how to catch muskies.

First and foremost you need the right set of tools to make your fishing venture successful.

You should have with you a 7 to 8 foot heavy duty fishing pole and a fishing line weighing 20 to 25 pounds. Your fishing line should be according to your fishing rod. For example, if you use light to medium fishing rods in open water, 10 to 12 pound lines are most preferable. In places with thicker weed, you can use 12 to 15 pound test lines.

You must always use steel leaders. It is strongly advised to use black leaders as the muskies might spot the silver shine ahead of the lure and bite through the line.

For fishing with live bait then we suggest you go for the large minnows (5” to 8”) or bull frog offspring. They are primary in the Muskie diet so it will be both easier and simpler to catch them.

It is quite often than not rumored that a big lure will get you your Muskie. However, in reality that is really not so. Muskies tend to go for any size of lure. Your lure size basically depends on the kind of place you are fishing. For example, the depth of the water body you have chosen and if it has weeds and if yes, then how much. Eagle Lake is known to have clear water unless you decide to go to the backs of the bays. You can therefore, use big lures. It is also true that smaller lures will have higher visibility in clear waters. The choice of the lure’s size really does not matter as the Muskies in Eagle Lake always have an appetite to fulfill and will go for anything. You can put the traditional “big lure equals to Muskie” idea to rest. If you are going to Muskie hunt in open water you might want to try bigger lures. Colored lures are now available and many Muskie fishers have discovered specific color combinations that works wonderfully. For instance, using the color red in the evenings is likely to be advantageous. Moreover, if you are going into water that are densely populated with Smallmouth Bass fishes like Eagle Lake, you should go for the colors green and brown.

It will be helpful to carry a map of the body of water so that you can have an idea of the depth indicators and contour lines. Moreover, if you are fishing in open water then you should use bigger lure for trolling since the water is almost always cleaner and has less weeds. If you decide to fish in places with more, thick weeds than you should choose a smaller lure. A big lure will be harder to carry but then again, you would have to bring in your line after every few minutes if you are fishing in a weedy place.

The weather condition does not really matter in the case of Muskie fishing. Many fishes begin their feeding cycle when there are changes in the atmospheric pressure. The Muskie seem to respond favorably when the water and atmosphere stays consistent.

While it is true that most people will troll as fast as 10 miles per hour, the best is to stay between 4 to 6 miles per hour. You might catch bigger muskies trolling faster, but with a gradual speed you will catch muskies of all sizes. 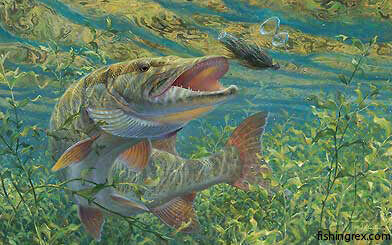 It is essential for Muskie catchers to be patient and apply every possible method of fishing. The Muskie fishes may put up a fight but the key here is to have the patience of a hermit. Muskie are widely known to be “the fish of 10,000 casts” but Iowa Great Lakes Muskie expert Lance Christensen states otherwise. According to Lance, “if you are fishing in good Muskie water and doing it the right way, then they are not that hard to catch.” You should make sure that you are not trolling too deep. You have to place your bait where the fish are in the water column. A Muskie might hit the bait, but is not likely to go down, as they do not have high visual below them. Also, you should keep the bait as close to the boat as possible.

Wabigoon Lake has the highest population of Muskies in all of North America. Apart from that, Muskies are typically found in large lakes from Northern Minnesota, Northern Wisconsin and Northern Michigan. They are also found swimming in the Great lake regions north into Canada; in most of the St. Lawrence River drainage.

Muskies usually enjoy gulping down fish, however they are also known to eat crayfish, ducklings, frogs, snakes, muskrats, mice, small mammals and small birds. Muskies have huge moths with sharp needle-like teeth. They will almost always devour preys that are 30% of their own total length; sometimes in a single gulp. Smaller baits are most desirable in the spring since their metabolism is slower in that time whereas, larger baits are preferable in the winter.