Perch fishes are mainly freshwater fishes primarily found around the British Isles, much of Europe, South Africa, Australia and Asia. Moreover, there is a number of yellow perch fishes that are close relatives of the American and Southern Canadian species. They belong to the animal class known as “Pereidae”. There are several kinds of perch found. For example, there is the yellow perch, The European perch and the Balkharsh perch. They are freshwater dwellers and are carnivorous by nature.Form this content we will learn more about how to catch perch easily.

White perch typically have small, pointed teeth and grow to be about 7 to 10 inches long. They weigh approximately 8 ounces to 1 pound. Their bellies are of white color, and have a dark greenish-grey color on their back. During mating season however, their fins may turn into a reddish color at where they start and their chin may take a purple color.

White perch’s mating season lasts from March to July and they reproduce once a year.

The lifespan of certain perch, like the yellow perch are roughly about 13 years.

Attractor hooks are quite often than not, weighted and sometimes, unweight. These hooks provide enough hook to attach a piece of worm, minnow, maggot or grub; all of which are very good perch bait. The basic idea behind these is, the fish when far away will spot the flash and the zip, the color adds and will be lured to come closer. Once closer, its eyes will fall on the real bait. 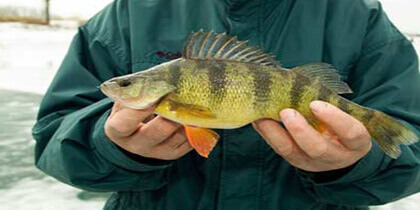 It is extremely important that you are cautious about your area and most importantly, the depth at which you have caught your perch. Perch is usually found roaming around the depth they favor; which actually depends on the water temperature. This is especially true in the summer and again in the winter, if you decide to try “ice fishing”. You should try placing your bait into the water again. Try the same place in which you had caught your first perch, since perch is almost always never suspend and are generally feeds at the bottom. In the summer time, the perch will like very deep ends of the water and in the spring and very later in the fall will go for the shallow ends of the water. In any case, you may try fishing for perch in the depth between 6 feet to 15 feet deep. The depth is very much emphasized in this article, because, the perch is well known for roaming around and will burrow deep into the water during certain conditions. In most cases, a perch can be successfully caught in shallow waters, plus, you will end up having a lot of fun!

The perch is notorious for stealing baits from fishermen. Therefore, it is best to use a small hook in order to stop them from getting away. Moreover, try to maintain your bait at the tip of your hook as then you will be more likely to set your hook when a perch grabs it.

You should not bother with removing your hook and re-baiting if you catch your first perch. Since, the perch is from a school of fish, you will be able to find another one in the place you have found one already. The perch travel in schools, so you may want to fish them out as fast as possible; since they do not stay put in the same place for a long time. Hence, the use of crappie bags is recommended for you previously in this article.

Fishing may just be a fun sport, but fishing particularly for the perch means that you are fishing for one of the finest and delicious meat from the freshwaters. If you have gone through our article that tells you all about how to catch the perch, we are sure you can be successful in your venture. We hope you are able to fish out your perfect perch!